That moment when your threenager comes into your room in the middle of the night because she’s scared or something to that effect and climbs all over you and your husband for no less than 2 hours until she finally settles in a horizontal position across your pillows which you happen to be using and when Daddy suggests that she moves she begins to sob an uncontrollable “Oh Woe Is Me” sob that makes you unwillingly rise from your non-slumber and carry her back to her bed and lay down next to her so she calms down but then you fall asleep only to be woken by your husband an hour later because the sun is rising so you slip out of her bed so as not to disturb the now-sleeping-beauty and begin to get ready for the day by getting your other children dressed, fed, making lunches, and all that other schtuff that makes mornings absolutely and maddeningly entertaining if you were a fly in the wall but you’re not, so you’re just mad, probably from the lack of sleep for the better part of a decade. 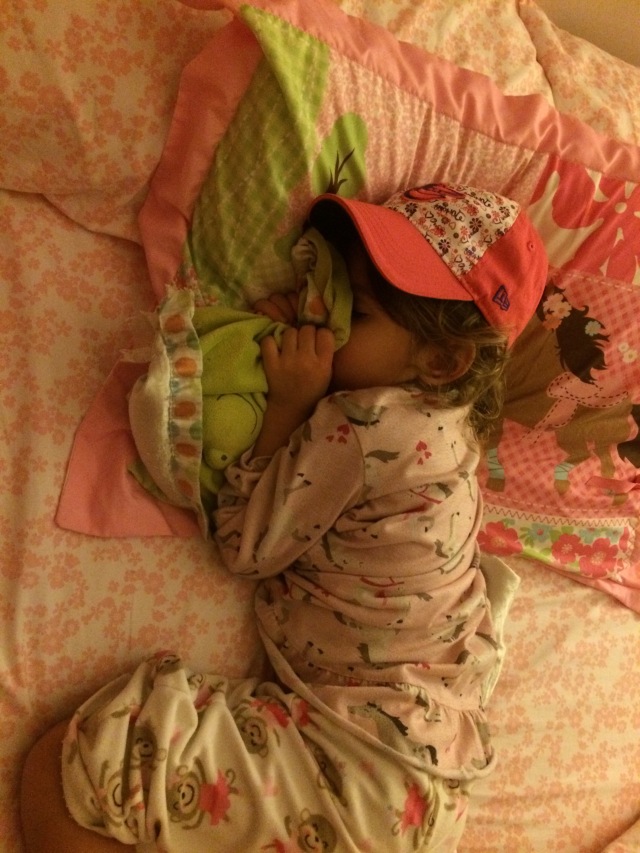 But then the princess emerges from her kingdom mere minutes before it’s time to depart and you think, “Effit. Keep the pajamas on and here’s breakfast to go, Kid” because it’s time to go and MONDAYS.

You arrive at school and you hear the comments about your daughter still in her pajamas but you don’t let it bother you because 1) You made it to school on time for her older siblings  2) She’s the youngest so rules don’t apply to her…duh… 3) It’s not a school day for her anyway 4) MON-DAY {nuff said.}

After a busy but accomplished day of cooking, cleaning, and playing dress up you inform your threenager that it’s time to get out of her dress up clothes and into real clothes where upon she immediately ventures upstairs to put on a fresh pair of pajamas, tights, and her tap shoes which she disliked SO MUCH that she insisted on dropping dance class, which you did just last week, but now she is happily tapping off into the sunset to pick up her siblings at school, where people notice that she is wearing yet another pair of pajamas and that her “outfit” makes no sense and you STILL don’t care because 1) You made it to school on time to pick up her older siblings 2) She’s still the youngest so rules still don’t apply to her…duh… 3) It wasn’t a school day for her anyway 4) She looks adorable 5) MON-DAY {nuff said.}